Küsterer Brauhaus has announced its grand opening will be August 16th, 2022! Add it to your calendar and get ready to drink some quality beers at the newest West Side beer hall in Grand Rapids.

Brewery Nyx has finally opened it’s gluten free taproom. It actually opened July 9th but I was on vacation and didn’t remember to post until today! Stop in and try a gluten free beer, let me know what you think.

City Built Brewing will finally open 11 a.m. Saturday, May 27 after more than a year delay. Located at 820 Monroe Ave in the North Monroe district this brewery fills a gap left by Founders when they left the Brassworks building 10 years ago.
City Built will start off with a five-day-a-week schedule: 11 a.m. to 11 p.m. Wednesday and Thursday; 11 a.m. to midnight Friday and Saturday, and noon to 9 p.m. on Sunday.
The 2,300-square-foot space has a 10-barrel brewing system, a kitchen, a 180-seat taproom and a meeting room, dubbed The Second Ward, available for large groups and business meetings.
The food will have Puerto Rican style and the brewer favors experimentation with unusual herbs and spices to create flavorful, idiosyncratic beers.
So if you are still in Grand Rapids this Memorial Weekend, visit City Built Brewing and welcome them to Beer City!

Railtown Brewery grand opening is set for December 12th, 2014 from 3pm to midnight. They will have five beers on tap including a blond ale, a brown, an IPA, a milk stout and a weizenbock. The Cutlerville-Gaines Area Chamber of Commerce will hold a ribbon-cutting ceremony at 2 p.m. at the brewery before the doors open on Friday. The taproom has seating for 50 people so come early if you want to get a seat and they don’t serve food but you are welcome to bring your own.
Visit Railtown Brewing facebook page for updates

Pigeon Hill Brewing Company is opening Friday, March 21! The brewery, located at 500 W. Western Ave,
Muskegon, Michigan 49440, will open its doors to the public from 7-11 p.m. Friday, March 21st and from 5-10 p.m. on Saturday, March 22nd. After the weekend updated hours will be added to their facebook page as they determine demand and their beer supplies.

Pigeon Hill’s tap list will feature the Walter Blonde Ale, the 1762 Russian Imperial Stout, the Besto Bohemian Pilsner, the LMFAO (Let Me Fetch An Oatmeal) Stout, the Shifting Sands IPA and the Petite Soleil Saison. The brewery will also offer non-alcoholic pink lemonade and glass bottle Faygo. The brewery will not serve food.

During opening weekend they will be limiting the number of people in the taproom to allow for the best experience possible so depending on demand you might have to wait in line outside. Also their bathroom facilities aren’t finished yet so they have provided port-a-potties outdoors as well but they will have beer and they didn’t want to wait for contractors to finish building until they could serve you!

Once inside Pigeon Hill brewery look for interesting features brought back and preserved from the local history including tables made with wood salvaged from the bottom of Muskegon Lake from the Lumber Era, a pool table built by Brunswick that was reportedly played on by silent film star and Bluffton vacationer Buster Keaton and light fixtures recycled from S.D. Warren (the Sappi paper mill), Continental Motors Co. and Brunswick Bowling. 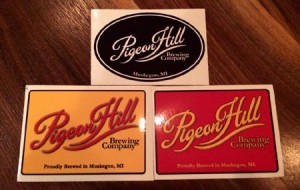